In this post we look following windows in Visual Basic Editor:

When you are working in VBE, each file open is called a Project. You can think of a project as a collection of objects.

You can expand a project by clicking plus sign (+) at the left of the project’s name in Project window.

Contract a project by clicking minus sign (-) to the left of the project’s name in Project window. Or you can simply double click the items to expand or contract them.

The concept of Object may not be clear to you at this moment. However, things become much clearer in subsequent topics.

Don’t be too concerned if you don’t understand what’s going on at this point.

Follow below steps to add a new VBA module to a project:

When you record a macro or create a blank macro, Solidworks automatically adds a module to hold the codes.

If you want to remove a module from Project window then follow below steps for that:

VBE always trying to keep you from doing something that you will regret, hence it will ask if you want to export the code in the module before deleting the code.

Exporting and Importing of objects

Every object in a VBA project can be saved to a separate file. Saving an individual object in a project is known as Exporting.

Reason for exporting a file is that you can also import objects in a project.

Exporting and Importing objects might be useful if you want to use a particular object (such as a VBA module or a UserForm) in a different project.

Below steps show how to export an object:

You get a dialog box that asks for a filename. Note that the object remains in the original project only a copy of object is exported.

Importing an object is also a similar process, which is shown below:

You get a dialog box that asks for a file. Locate the file and click open.

You should only import a file if was export by using File -> Export file command.

As you become proficient with VBA, you spend a lot of time with working in the Code window.

Macros that you record are stored in a module, and you can type a VBA code directly into a VBA module.

If you have several projects open, the VBE may have lots of Code window at any given time. Below figure shows an example of this. 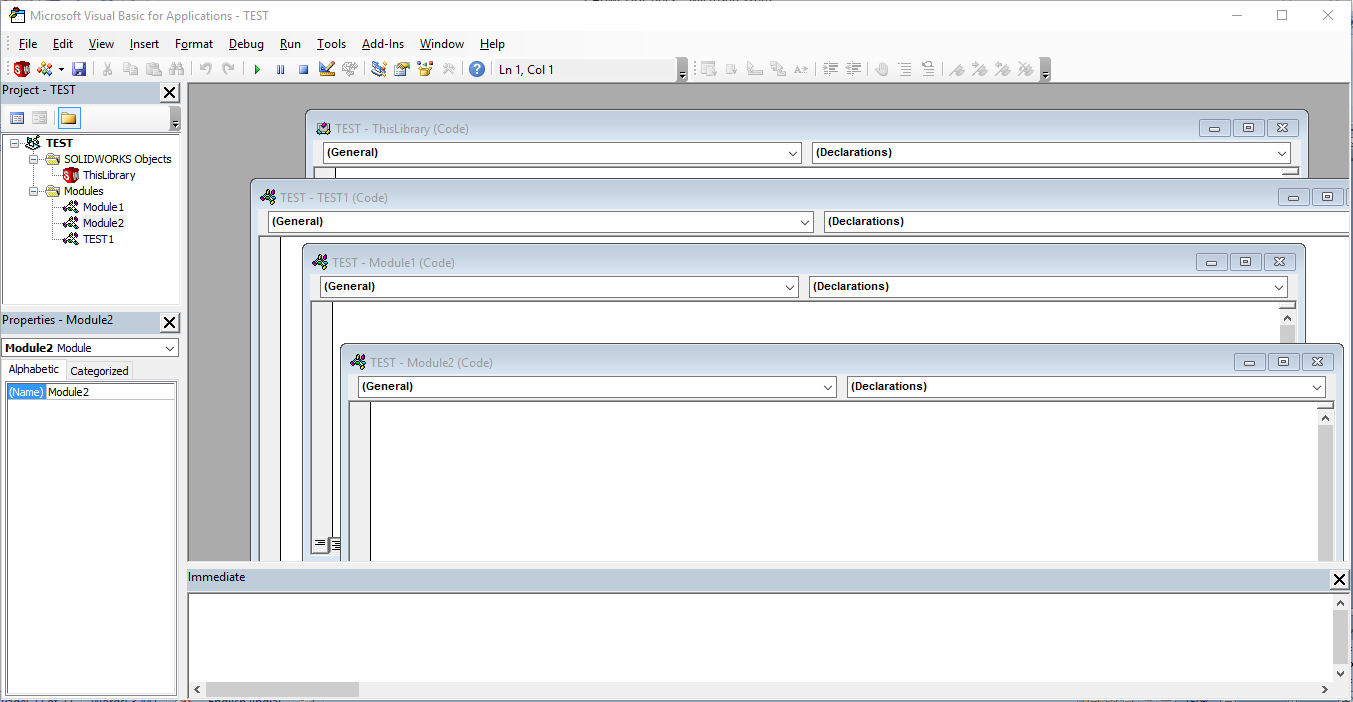 Code windows are much like your files opened in Solidworks. You can minimize them, maximize them, resize them, and hide them and so on.

Most people find it much easier to maximize the code window that they are working on. Doing so lets you see more code and keeps you from getting distracted.

To restore a window to its original size, click the restore button. When the Code window is maximized, its title bar is not visible, so you will find the restore below the VBE title bar.

Sometimes you want to have two or more Code windows visible.

For example, you want to compare the code in the two modules or copy code from one module to another.

You can arrange the windows manually, or use the Window -> Tile Horizontally or Window ⇨ Tile Vertically command to arrange them automatically.

You can quickly switch among code window by pressing Ctrl + TAB. If you repeat that key combination, you keep cycling through all the open code windows.

Minimizing a window gets it out of the way. You can also click the window close button in a Code window’s title bar to close the window completely. (Closing a window just hides it; you won’t lose anything.)

To open it again, just double-click the appropriate object in the Project window. Working with these Code windows sounds difficult that it really is.

In general, a VBA module can hold three types of code:

A single VBA module can store any number of Sub procedures, Function procedure and declaration.

Well, there is a limit – about 64,000 characters per module. It is very rare that if anybody reaches that limit but if someone reaches then the solution is simply insert a new module.

How you organize a VBA module is totally up to you. Some people prefer to keep all their VBA code in a single module others (like me) likes to split up the code into several different modules or even classes. It is a personal choice like arranging furniture.

Inserting VBA code into a Module

An empty VBA module is like a fake food you see in the advertisements. It looks good but it does not really do much.

Before you can do anything meaningful, you must have some VBA code in the VBA module. You can insert VBA code into VBA module in three ways:

Entering code directly into a module

Sometimes the best route is the most direct one. Entering the code directly involves, typing the code via your keyboard.

Entering and editing a text in a VBA module works as you might expect. You can select, copy, cut, paste and do other things as you do in other word processing software.

Use the TAB key to indent some of the lines to make your code easier to read. This is not necessary, but it is a good habit to acquire.

As you go through you will understand why indenting code lines is helpful.

A single line of VBA code can be as long as you like.

However, you may want to use the line-continuation character to break up the lengthy line of code.

To continue a single line of code (also known as statement) from one line to next, end the first line with a space followed by an underscore (_). Then continue the statement in the next line.

Below is given the example of a single statement split into two lines:

This statement would perform the same way if it were entered in a single line (with no continuation characters).

Notice that I indented the second line of statement. Indenting is optional but it clarifies the fact that these lines are not separate statements.

The engineers who designed VBE knew that people like us would be making mistakes. Therefore, the VBE has multiple levels of Undo and Redo.

If you deleted a statement that you should not have, use the Undo button on the toolbar (or press Ctrl+Z) until the statement shows up.

After undoing, you can use the Redo button to perform the changes you have undone. This redo/undo stuff is much like you use in other software. Until you use it, you cannot understand.

Ready to enter some live code, try the following steps:

F5 is a shortcut for the Run -> Run Sub/UserForm command.

If you entered the code correctly, VBE execute the procedure, and you can respond to the simple dialog box as shown in below figure. 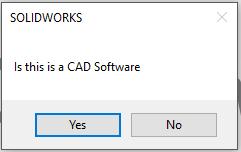 When you enter the code listed in step 4, you might notice that the VBE makes some adjustments to the text you enter.

Also, the VBE changes the color and capitalization of some text. This is all perfectly normal. It is just VBE’s way of keeping things neat and readable.

If you followed the previous steps, you just wrote a VBA Sub procedure, also known as a macro.

When you press F5, VBE executes the code and follows the instructions.

In other words, VBE evaluates each statement and does what you told it to do.

Another way you can get code into a VBA module is by recording your actions, using the in-built macro recorder.

By the way, there is absolutely no way you can record the GuessName procedure shown in the preceding section.

You can record only things that you can do directly in Solidworks.

Displaying a message box is not in application’s normal repertoire. The macro recorder is useful, but in many cases, you’ll probably need to enter at least some code manually.

We have already seen how macros are recorded. So there is no need for us to go twice for same thing. If you want to see how it is done go to Open VBA in Solidworks topic

The final method for getting code into a VBA module is to copy it from another module or from some other place (such as a Web site i.e. Solidworks forum).

For example, a Sub or Function procedure that you write for one project might also be useful in another project.

Instead of wasting time in re-entering the code, you can activate the module and use the normal Clipboard copy-and-paste procedures.

After pasting it into a VBA module, you can modify the code if necessary.

Next post will be about Sub and Function Procedures.