A variable’s scope determines which modules and procedures can use the variable.

The lowest level of scope for a variable is at the procedure level.

A procedure is either a Sub or a Function procedure.

Variables declared with this scope can be used only in the procedure in which they are declared.

When the procedure ends, the variable no longer exists (it goes to the great big bucket in the sky), and your CAD application frees up its memory.

If you execute the procedure again, the variable comes back to life, but its previous value is lost.

The most common way to declare a procedure-only variable is with a Dim statement.

Dim doesn’t refer to the mental capacity of the VBA designers.

Rather, it’s an old programming term that’s short for dimension, which simply means you are setting aside memory for a particular variable.

You usually place Dim statements immediately after the Sub or Function statement and before the procedure’s code.

Notice that the last Dim statement in the preceding example doesn’t declare a data type; it declares only the variable itself. The effect is that the variable MyValue is a Variant.

By the way, you can also declare several variables with a single Dim statement, as in the following example:

Unlike some languages, VBA doesn’t allow you to declare a group of variables to be a particular data type by separating the variables with commas.

For example, though valid, the following statement does not declare all the variables as Integers:

If you declare a variable with procedure-only scope, other procedures in the same module can use the same variable name, but each instance of the variable is unique to its own procedure.

In general, variables declared at the procedure level are the most efficient because VBA frees up the memory they use when the procedure ends.

Sometimes, you want a variable to be available to all procedures in a module.

If so, just declare the variable (using Dim or Private) before the module’s first Sub or Function statement — outside any procedures.

This is done in the Declarations section, at the beginning of your module.

This is also where the Option Explicit statement is located.

Below figure shows how you know when you’re working with the Declarations section. 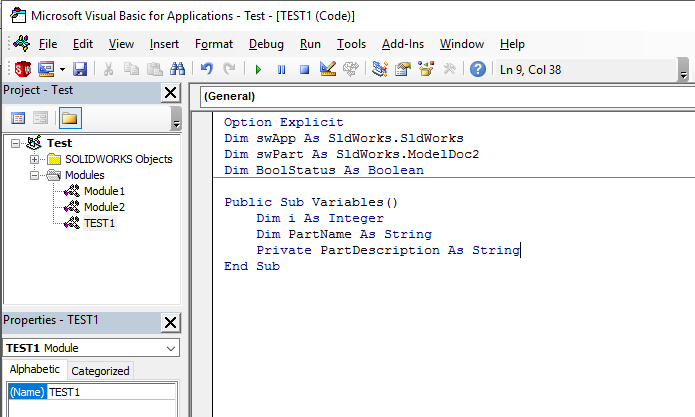 As shown in above image, I want a variable named swApp, so that it can available to all procedures in this module.

Hence I declare this variable in Declaration section of VBE.

Next post wil be about Public, Static and Variable’s Life.

You May Also Enjoy