A UserForm is useful if your VBA macro needs to get information from a user.

For example, your macro may have some options that can be specified in a UserForm.

If only a few pieces of information are required (for example, a Yes/No answer or a text string), one of the techniques I describe in previous articles may do the job.

But if you need to obtain more information, you must create a UserForm.

To create a UserForm, you usually take the following general steps:

When you are designing a UserForm, you are creating what developers call the Graphical User Interface (GUI) to your application.

Take some time to consider what your form should look like and how your users are likely to want to interact with the elements on the UserForm.

Try to guide them through the steps they need to take on the form by carefully considering the arrangement and wording of the controls.

Like most things VBA-related, the more you do it, the easier it gets.

Each dialog box that you create is stored in its own UserForm object — one dialog box per UserForm.

You create and access these UserForms in the Visual Basic Editor.

To insert a UserForm object with the following steps:

The VBE insert a new UserForm object with an empty dialog box.

The VBE inserts a new UserForm object, which contains an empty dialog box.

Below figure shows a UserForm — an empty dialog box with some controls in Toolbox.

Adding controls to a UserForm

When you activate a UserForm, the VBE displays the Toolbox in a floating window, as shown in above figure.

You use the tools in the Toolbox to add controls to your UserForm.

If the Toolbox doesn’t appear when you activate your UserForm, choose View -> Toolbox.

To add a control, just click the desired control in the Toolbox and drag it into the dialog box to create the control.

After you add a control, you can move and resize it by using standard techniques.

Below table indicates the various tools, as well as their capabilities.

To determine which tool is which, hover your mouse pointer over the control and read the small pop-up description.

Changing properties for a UserForm control

Every control you add to a UserForm has a number of properties that determine how the control looks or behaves.

In addition, the UserForm itsel also has its own set of properties.

Below figure shows the properties window when a CommandButton control is selected: 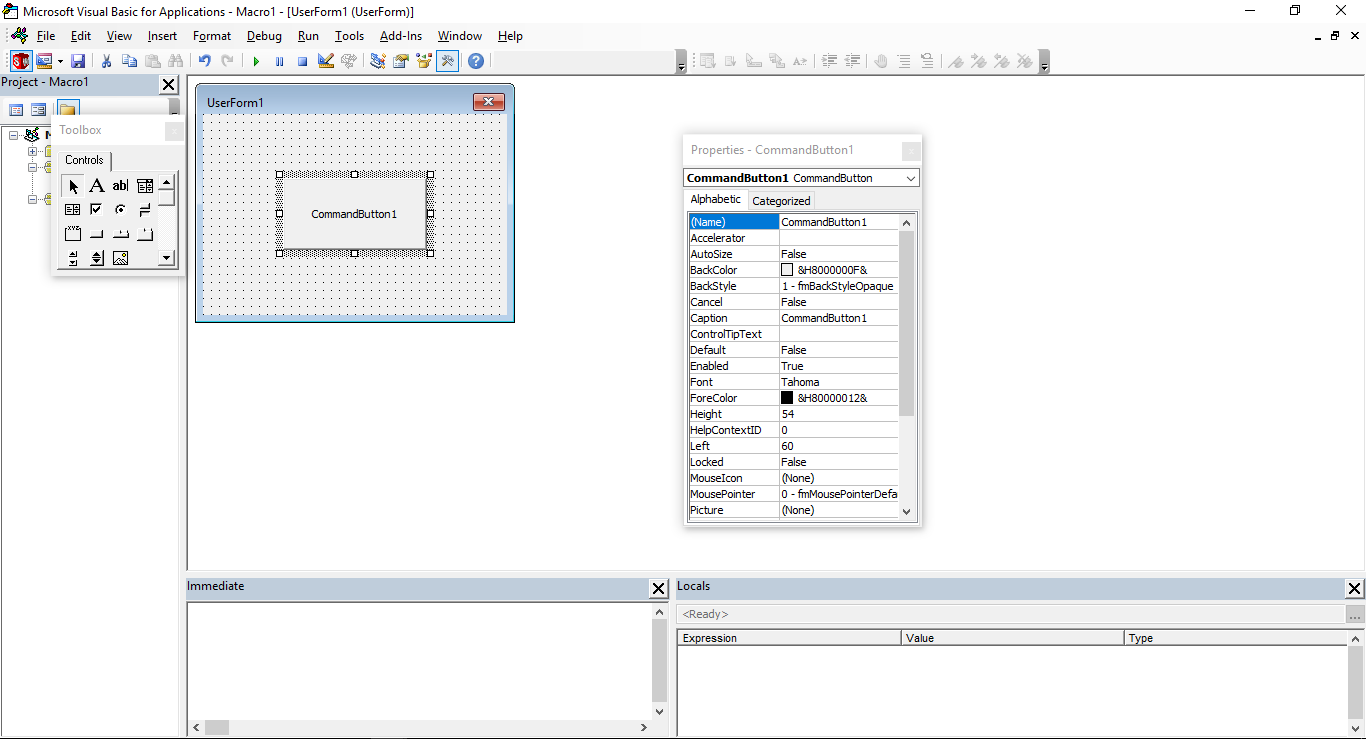 Properties for controls include the following:

Each control has its own set of properties (although many controls have some common properties). To change a property using the Properties window:

If you select the UserForm itself (not a control on the UserForm), you can use the Properties window to adjust UserForm properties

Some of the UserForm properties serve as default settings for new controls you drag onto the UserForm. For example, if you change the Font property for a UserForm, controls that you add will use that same font. Controls that are already on the UserForm are not affected.

Every UserForm object has a Code module that holds the VBA code (the event-handler procedures) executed when the user works with the dialog box.

The Code window is empty until you add some procedures. Press Shift+F7 to return to the dialog box.

Here’s another way to switch between the Code window and the UserForm display:

If you’re viewing code, double-click the UserForm name in the Project window to return to the UserForm.

You display a UserForm by using the UserForm’s Show method in a VBA procedure.

The macro that displays the dialog box must be in a VBA module — not in the Code window for the UserForm.

Then VBA executes any remaining statements in the procedure.

Most of the time, you won’t have any more code in the procedure.

Using information from a UserForm

The VBE provides a name for each control you add to a UserForm.

The control’s name corresponds to its Name property.

Use this name to refer to a particular control in your code.

The following statement makes this control appear with a check mark:

Most of the time, you write the code for a UserForm in the UserForm’s code module.

If that’s the case, you can omit the UserForm object qualifier and write the statement like this:

I recommend that you change the default name the VBE has given to your controls to something more meaningful.

This will sum-up our tutorials on Visual Basic for Application. From now on I will give tutorials on how to use Solidworks commands with the help of VBA Macro.

If you want to know any explaination on any topic related to VBA, please drop a comment and I will try to give it to you.

I have started VBA UserForm Example in this tutorials lists.

So if you want to learn how I use these Forms, you can watch them in UserForm Example List Post.